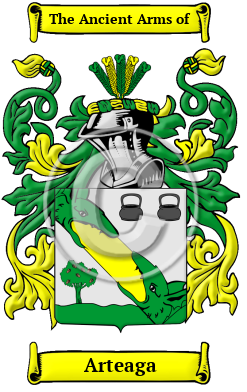 Derived from the Basque words "art(h)e," meaning "oak" and the suffix "aga," denoting "place," Arteaga was the name of several place names before becoming a surname. It no doubt originally described a place where oak-trees grew in abundance.

Early Origins of the Arteaga family

The surname Arteaga was first found in Gauteguiz de Arteaga, near Busturia, Vizcaya province from the 10th century.

Early History of the Arteaga family

This web page shows only a small excerpt of our Arteaga research. Another 78 words (6 lines of text) covering the years 1594, 1615, 1633 and 1703 are included under the topic Early Arteaga History in all our PDF Extended History products and printed products wherever possible.

Spelling variations of this family name include: Arteaga, Atiaga and others.

More information is included under the topic Early Arteaga Notables in all our PDF Extended History products and printed products wherever possible.

In the United States, the name Arteaga is the 3,270th most popular surname with an estimated 9,948 people with that name. [1]

Arteaga migration to the United States +

Arteaga Settlers in United States in the 19th Century