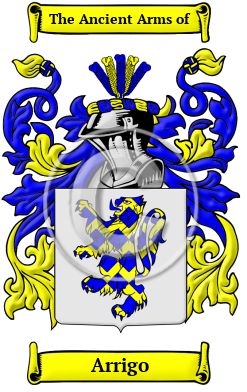 During the times when surnames first began to be used in this region, a common way to create a surname was to use the given name of the father. Such names are classed as patronymic surnames. Arrigo was created from came from the Teutonic name Henry. In fact, the name Henry is derived from the Old German Haimric which means home-rule. There were many Teutonic names in Italy following the fall of the Roman Empire.

In comparison with other European surnames, Italian surnames have a surprising number of forms. They reflect the regional variations and the many dialects of the Italian language, each with its own distinctive features. For example, in Northern Italy the typical Italian surname suffix is "i", whereas in Southern Italy it is "o". Additionally, spelling changes frequently occurred because medieval scribes and church officials often spelled names as they sounded rather than according to any specific spelling rules. The spelling variations in the name Arrigo include and others.

Migration of the Arrigo family