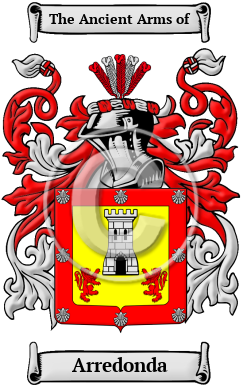 Noble surnames, such as Arredonda, evoke images of the ancient homeland of the Spanish people. The original bearer of the name Arredonda, which is a local surname, once lived, held land, or was born in the beautiful region of Spain. In Spain, hereditary surnames were adopted according to fairly general rules and during the late Middle Ages, names that were derived from localities became increasingly widespread. Local names originally denoted the proprietorship of the village or estate. Many Spanish local names reflect Arabic words or place-names because Spain was conquered by the Muslim Moors from the 8th to 12th centuries. The Arredonda family originally lived in a round place, such as a field or meadow.

Early Origins of the Arredonda family

The surname Arredonda was first found in Castile, an important medieval Christian kingdom in northern Spain.

Early History of the Arredonda family

This web page shows only a small excerpt of our Arredonda research. Another 92 words (7 lines of text) covering the years 1127, 1653, 1702, 1789 and 1795 are included under the topic Early Arredonda History in all our PDF Extended History products and printed products wherever possible.

Prominent among members of the family Isidoro Arredondo (1653-1702), court painter to King Carlos II; and Nicolás Antonio de Arredondo, Viceroy of Río de la Plata from 1789-1795. He had the streets of Buenos Aires paved, and protected and developed the Argentinian cattle...
Another 42 words (3 lines of text) are included under the topic Early Arredonda Notables in all our PDF Extended History products and printed products wherever possible.

Migration of the Arredonda family

Some of the first settlers of this family name or some of its variants were: Baltasar de Arredondo, who sailed to Cuba in 1513; Juan Redonda sailed to Río de la Plata in 1535; Bartolomé Redondo sailed to New Spain in 1536.