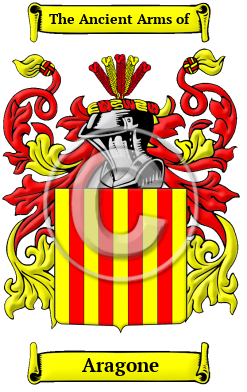 The Aragone family originally lived in the area of Aragon. Noble surnames, such as Aragone, evoke images of the ancient homeland of the Spanish people. The original bearer of the name Aragone, which is a local surname, once lived, held land, or was born in the beautiful region of Spain. In Spain, hereditary surnames were adopted according to fairly general rules and during the late Middle Ages, names that were derived from localities became increasingly widespread. Local names originally denoted the proprietorship of the village or estate. Many Spanish local names reflect Arabic words or place-names because the Muslim Moors from the 8th to 12th centuries conquered Spain. The Aragone family derived it name from the place-name Aragon. Aragon was one of the ancient kingdoms of Spain.

Early Origins of the Aragone family

The surname Aragone was first found in Aragon, in northeastern Spain.

Early History of the Aragone family

Prominent among members of the family 15th century writer Enrique de Aragón, Marquis of Villena; 15th century politician and military officer Alonso de Aragón y Escobar, son of King John II of Aragon and his consort; Francisco de Borja y Aragon, prince of Squillace(1581-1658), a Spanish writer, official in the court of King Philip III of Spain (1615-1621), viceroy of...
Another 60 words (4 lines of text) are included under the topic Early Aragone Notables in all our PDF Extended History products and printed products wherever possible.

Migration of the Aragone family