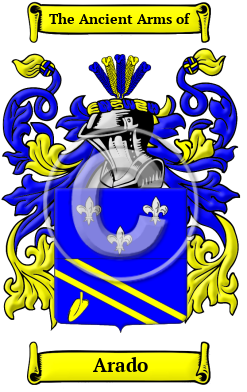 Early Origins of the Arado family

The surname Arado was first found in the north of Italy, particularly Liguria, a small region which hugs the coast south of Piedmont and west of Emilia-Romagna and Tuscany. Though it is far more common in the north, the name does occasionally appear in the south. When it does appear in the south, it is usually spelled with an "o" at the end, whereas the other variations generally come from the north. The name is most likely taken from the name of a place, such as "Terra Arata," a place whose name means "fertile or plowed land," but it could also come from the Italian word "aratore," meaning "plowman."

Early History of the Arado family

This web page shows only a small excerpt of our Arado research. Another 42 words (3 lines of text) are included under the topic Early Arado History in all our PDF Extended History products and printed products wherever possible.

Spelling variations of this family name include: Arata, Arato, Arati, Arado, Aratari and others.

More information is included under the topic Early Arado Notables in all our PDF Extended History products and printed products wherever possible.

Migration of the Arado family

Some of the first settlers of this family name or some of its variants were: bearers of the $ family name, who settled along the east coast of North America near the end of the 19th century.