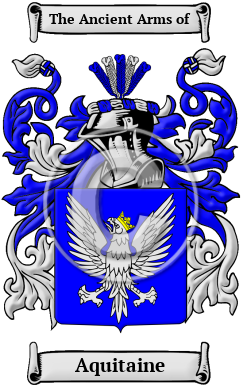 From the historical and fascinating Italian region of Venice emerged a multitude of noble families, including the distinguished Aquitaine family. The people of this region were originally known only by a single name, but it became necessary for them to take on a second name to identify themselves as populations grew and travel became more frequent. The process of adopting fixed hereditary surnames was not complete until the modern era, but the use of hereditary family names in Italy began in the 10th and 11th centuries. The Aquitaine surname evolved from a nickname; these usually reflected the physical characteristics or attributes of the first person that used the name. The surname Aquitaine came from a person who had the sight of an eagle. The surname Aquila is derived from the word aquila, which means eagle. Thus, the surname could also be a name for a spot where eagles were often seen or for an owner of an eagle. The surname Aquila is also of local origin, derived from the city of L'Aquila, which is the capital of the region of Abruzzi in the center/south of the peninsula.

Early Origins of the Aquitaine family

The surname Aquitaine was first found in the 11th century at Benevento, a city north of Naples. Riccardo Aquila was master of much territory in this area in 1090.

Early History of the Aquitaine family

This web page shows only a small excerpt of our Aquitaine research. Another 49 words (4 lines of text) covering the years 1105, 1204, 1488, 1560, 1630 and 1692 are included under the topic Early Aquitaine History in all our PDF Extended History products and printed products wherever possible.

Surnames that originated in Italy are characterized by an enormous number of spelling variations. Some of these are derived from regional traditions and dialects. Northern names, for instance, often end in "o", while southern names tend to end in "i". Other variations come from the fact the medieval scribes tended to spell according to the sound of words, rather than any particular set of rules. The recorded variations of Aquitaine include Aquila, Aquilani, Aquilante, Aquilanti, Aquili, Aquilina, Aquilini, Aquilino, Aquilone, Aquiloni, Aquilotti, D'Aquila, dell'Aquila, Aquilar and many more.

Prominent among members of the family was Caspar Aquila (1488-1560), birth name Johann Kaspar Adler, a German reformer and the Aquili family of Rome who were famous painters. The Aquilini family of Lesi produced many painters over a two hundred year period ending in the 17th century. Antonio Aquili...
Another 49 words (4 lines of text) are included under the topic Early Aquitaine Notables in all our PDF Extended History products and printed products wherever possible.

Migration of the Aquitaine family

Research into the origins of individual families in North America has revealed records of the immigration of a number of people bearing the name Aquitaine or a variant listed above: Nicholas Aquilar, who arrived in South Carolina in 1822, at the age of 26; Angela Aquilina, aged 14, who arrived at Ellis Island from Serrafalco, Italy, in 1924.