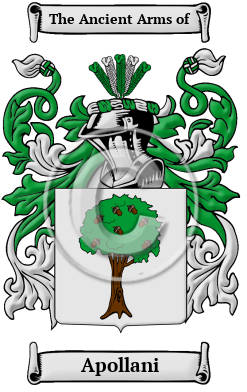 The process of adopting fixed hereditary surnames in Italy began in the 10th and 11th centuries, but was not widespread until the modern era. Italian hereditary surnames were developed according to fairly general principles and they were characterized by a profusion of derivatives coined from given names. The surname Apollani was derived from the Latin name Apollonia, which is the Latin feminine form of the Greek masculine name "Apollonios," of the same root as the name of the sun god "Apollo." Versions of this name became extremely popular during the Middle Ages in devotion to St. Apollonia, a 3rd century saint and martyr.

Early Origins of the Apollani family

The surname Apollani was first found in Florence (Italian: Firenze), where they held land and estates from early on. In those ancient times only persons of rank, the podesta, clergy, city officials, army officers, artists, landowners were entered into the records. To be recorded at this time, at the beginning of recorded history, was of itself a great distinction and indicative of noble ancestry.

Early History of the Apollani family

Prominent among members of the family was Giovan-Matteo Appolloni, the mayor of Montefalco in 1557; Giacomo Apollonio (1584-1654), an Italian painter of the late-Renaissance and early-Baroque periods; Paolo Appolloni who was Governor of...
Another 33 words (2 lines of text) are included under the topic Early Apollani Notables in all our PDF Extended History products and printed products wherever possible.

Migration of the Apollani family

Some of the first settlers of this family name or some of its variants were: Catharina Appoloni, age 20, who arrived at the port of Baltimore in 1874; Sebastian Polonia, who arrived in Philadelphia in 1840; as well as Adolfo Apolloni, born in Rome in 1855.