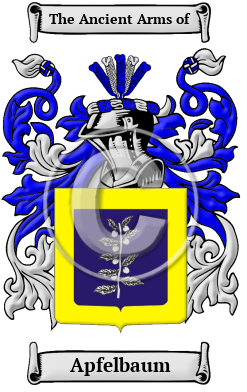 Early Origins of the Apfelbaum family

The surname Apfelbaum was first found in the duchy of Brunswick, where ancestors of today’s bearers of the name Apfelbaum, were part of the Feudal System that later became the backbone of early European society. One of the earliest records of this name is a document in which reference is made to the name, "curia dicta zume appelbume," in the year 1310.

Early History of the Apfelbaum family

This web page shows only a small excerpt of our Apfelbaum research. Another 144 words (10 lines of text) covering the year 1685 is included under the topic Early Apfelbaum History in all our PDF Extended History products and printed products wherever possible.

Spelling variations of this family name include: Applebaum, Appelbaum, Appelbohm, Appelbom, Apfelbaum and many more.

More information is included under the topic Early Apfelbaum Notables in all our PDF Extended History products and printed products wherever possible.

Apfelbaum migration to the United States +

Apfelbaum Settlers in United States in the 18th Century

Apfelbaum Settlers in United States in the 19th Century

Historic Events for the Apfelbaum family +