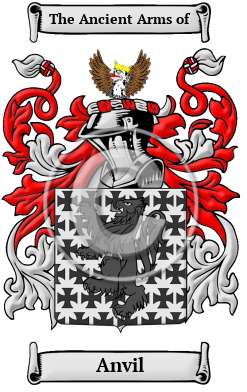 Early Origins of the Anvil family

The surname Anvil was first found in Kent where "in the parish of Waltham is the hamlet and green of Hanville, so called after the family of Handville or Handfield, whose habitation was close to it. Several of them lie buried in this church; they afterwards removed to Ullcombe, Ashford, and Canterbury; at the former place, a descendant of them still remains" (in 1800). [1]

Early History of the Anvil family

This web page shows only a small excerpt of our Anvil research. Another 129 words (9 lines of text) covering the years 1510, 1600, 1106, 1432, 1455 and 1487 are included under the topic Early Anvil History in all our PDF Extended History products and printed products wherever possible.

Before English spelling was standardized a few hundred years ago, spelling variations of names were a common occurrence. Elements of Latin, French and other languages became incorporated into English through the Middle Ages, and name spellings changed even among the literate. The variations of the surname Anvil include Handville, Hanville, Anville, Andville, Anvil, Anvill, Handvile, Handfill and many more.

More information is included under the topic Early Anvil Notables in all our PDF Extended History products and printed products wherever possible.

Migration of the Anvil family