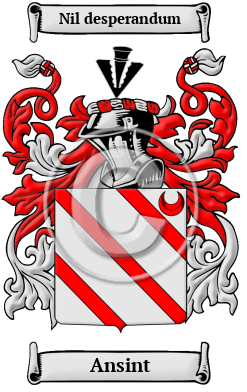 The surname Ansint is a baptismal name as in "the son of Anne", or the name could have been derived from one of the villages names North and South Anston in Yorkshire. Both villages date back to before the Domesday Book. They were listed there as Anestan and Litelanstan and were owned by Roger de Bully at that time. [1] In this case, the name Anston is thought to derive from the Old English ana + stan which meant "single or solitary stone." [2]

Early Origins of the Ansint family

The surname Ansint was first found in Lancashire. However, another branch of the family was found since early times at the township of Shugborough in Staffordshire. "The family of Anson have been seated in the county for many generations. William Anson, having purchased the manor in the reign of James I., made it his principal seat; and here in 1697, the distinguished admiral and circumnavigator, Lord George Anson, was born. He was raised to the peerage by the title of Lord Anson in 1747. The vale of Shugborough owes many of its beauties to the late Viscount Anson, father of the present peer, who was elevated to the rank of Earl of Lichfield in September 1831." [3]

Early History of the Ansint family

One relatively recent invention that did much to standardize English spelling was the printing press. However, before its invention even the most literate people recorded their names according to sound rather than spelling. The spelling variations under which the name Ansint has appeared include Anson, Hanson, Ansen, Eanson, Ansin, L'Anson and others.

Notables of this surname at this time include: George Anson, 1st Baron Anson (1697-1762), English admiral, noted for his circumnavigation of the globe; General Sir George Anson (1769-1849)...
Another 27 words (2 lines of text) are included under the topic Early Ansint Notables in all our PDF Extended History products and printed products wherever possible.

Migration of the Ansint family

At this time, the shores of the New World beckoned many English families that felt that the social climate in England was oppressive and lacked opportunity for change. Thousands left England at great expense in ships that were overcrowded and full of disease. A great portion of these settlers never survived the journey and even a greater number arrived sick, starving, and without a penny. The survivors, however, were often greeted with greater opportunity than they could have experienced back home. These English settlers made significant contributions to those colonies that would eventually become the United States and Canada. An examination of early immigration records and passenger ship lists revealed that people bearing the name Ansint arrived in North America very early: Wm. Anson, who came to Virginia in 1678; Richard Anson, who came to Maryland in 1681; Andrew Anson, who settled in America in 1749; George Anson, age 21, who arrived in Maryland in 1775.