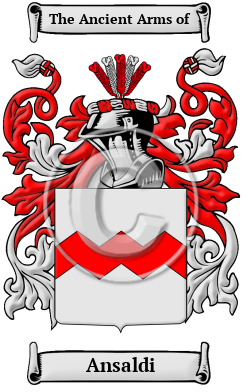 Early Origins of the Ansaldi family

The surname Ansaldi was first found in Bolgna (Latin: Bononia), the largest city and the capital of Emilia-Romagna Region. The famous University of Bolgna was founded in the 11th century, by the 13th century the student body was nearly 10,000. Dante and Petrarch studied there. Tisso was tried there for 1564 for writing satirical poems. Bologna naturally, is famous for its sausages. But many noted scholars were born there. In those ancient times only persons of rank, the podesta, clergy, city officials, army officers, artists, landowners were entered into the records. To be recorded at this time was in itself a family honor.

Ansaldo Doria (1134-1174) was a Genoese statesman and commander of the noble Doria family. His father was possibly named Genoaldo.

Ansaldi was an Italian automobile manufacturer founded in Milan in 1904 by Michele Ansaldi an engineer, designer, and industrialist. The only car they produced was sold as the F.I.A.T. Brevetti after the company was taken over in 1905.

Early History of the Ansaldi family

Prominent among members of the family was Giovanni Andrea Ansaldo (1584-1638), an Italian painter active mainly in Genoa. Born in Voltri, the son of a merchant. He trained under Orazio Cambiasi and possibly collaborated with Bernardo Strozzi. He is best known for the fresco decoration of the cupola of the Basilica della Santissima Annunziata del Vastato of Genova, completed during 1635-1638, just before his death. Giovanni Battista...
Another 65 words (5 lines of text) are included under the topic Early Ansaldi Notables in all our PDF Extended History products and printed products wherever possible.

Migration of the Ansaldi family