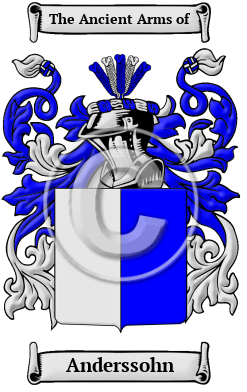 Schleswig-Holstein, which is the northernmost state in western Germany, is the homeland of the proud surname Anderssohn. The name is derived from the personal name "Andreas" or "Andres," meaning "man" or "manly." German surnames developed at a time when Schleswig, as well as most of the other German provinces, were states of the Holy Roman Empire. At first people used only a single name, but as the population grew and people began to travel, they began to find it necessary to take on an additional name to differentiate themselves. Fairly general principles guided the development of hereditary surnames in Schleswig.

Early Origins of the Anderssohn family

The surname Anderssohn was first found in Schleswig-Holstein and Denmark, where the family contributed greatly to the development of an emerging nation and would later play a large role in the political conflicts of the area. The family branched into many houses, some of which acquired estates and manors throughout the surrounding regions, where they played significant roles in the social and political affairs. From early on, the name was represented by predominantly Danish families, although most of the Schleswig branches and many of the southern Danish branches spoke German.

Early History of the Anderssohn family

This web page shows only a small excerpt of our Anderssohn research. Another 170 words (12 lines of text) covering the years 1733, 1360 and 1596 are included under the topic Early Anderssohn History in all our PDF Extended History products and printed products wherever possible.

Another 30 words (2 lines of text) are included under the topic Early Anderssohn Notables in all our PDF Extended History products and printed products wherever possible.

Migration of the Anderssohn family

Historic Events for the Anderssohn family +