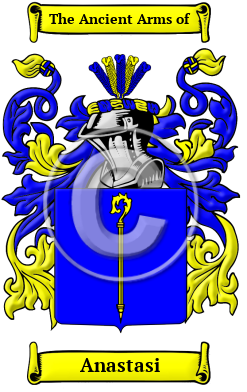 The Anastasi surname is a patronymic name created from the personal name Anastasio.

Early Origins of the Anastasi family

The surname Anastasi was first found in Ravenna, a city of Emilia, capital of the province of Ravenna. It dates back to the 2nd century B.C. It came under the dominance of Rome. Augustus made it his fleet port. It fell to the Goths but Justinian sent an army in 535 A.D and restored it to Italy. By the 13th it was independent under the papal states, and generally, except for the French revolution, remained so. It is rich in art, museums, galleries, churches and history. In those ancient times only persons of rank, the podesta, clergy, city officials, army officers, artists, landowners were entered into the records. To be recorded at this time was in itself a family honor.

Early History of the Anastasi family

This web page shows only a small excerpt of our Anastasi research. Another 100 words (7 lines of text) covering the years 1653 and 1704 are included under the topic Early Anastasi History in all our PDF Extended History products and printed products wherever possible.

Spelling variations of this family name include: Nastasi, Nestasi, Anastasi, Anestasi, Anostasi and many more.

Another 32 words (2 lines of text) are included under the topic Early Anastasi Notables in all our PDF Extended History products and printed products wherever possible.

Anastasi migration to the United States +

Anastasi Settlers in United States in the 19th Century