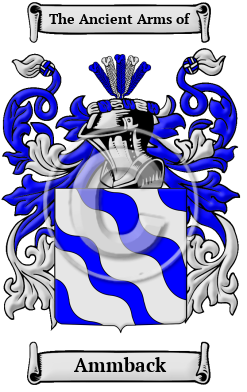 Those lands along the southeast coast of the Baltic sea were the birthplace of the great Prussian name Ammback. A single name was, at one time, all that people needed. However, increasing ease of travel and the burgeoning populations forced people to adopt a hereditary surname to set themselves apart from others. A common form of surname found in Prussia was the local name, a name taken on from an existing place-name. The surname Ammback was first used by someone who lived in the lands that formed the powerful German state of Prussia, which at one time was an immense German territory that stretched from France and the Low Countries to the Baltic sea and Poland.

Early Origins of the Ammback family

The surname Ammback was first found in Brandenburg, where the name was anciently associated with the tribal conflicts of the area. They declared allegiances to many nobles and princes of early history, lending their influence in struggles for power and status within the region. They branched into many houses, and their contributions were sought by many leaders in their search for power.

Early History of the Ammback family

This web page shows only a small excerpt of our Ammback research. Another 109 words (8 lines of text) covering the years 1738 and 1737 are included under the topic Early Ammback History in all our PDF Extended History products and printed products wherever possible.

In the medieval era, many different cultural groups lived in the German states. There are thus many regional variations of German surnames from that era. Westphalians spoke Low German, which is similar to modern Dutch. Many German names carry suffixes that identify where they came from. Others have phrases attached that identify something about the original bearer. Other variations in German names resulted from the fact that medieval scribes worked without the aid of any spelling rules. The spelling variations of the name Ammback include Ambach, Ammbach, Amback, Ammback, Ambache, Ammbache, Ambacke and many more.

Another 31 words (2 lines of text) are included under the topic Early Ammback Notables in all our PDF Extended History products and printed products wherever possible.

Migration of the Ammback family

Prussia played an extremely influential role in shaping modern German history. It remained a part of Germany until after the Second World War. Prussia was divided among the Soviet Union, Poland, East Germany and West Germany. Many Prussians became residents of these new countries after the War, and many migrated to other parts of Germany or Europe, as well as to North America. In the United States, the majority of settlers landed in Philadelphia, and moved on to Ohio, Texas, Illinois, California, New York, and Maryland. Many German settlers also migrated to Canada, particularly to Ontario and the Prairies. Amongst the settlers in North America with this distinguished name Ammback were several bearers of the name who came to the Eastern United States.