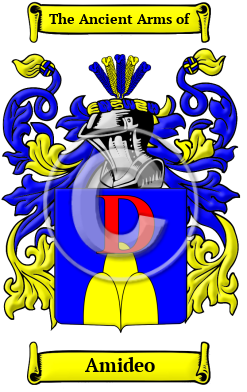 From the historical and enchanting Italian region of Tuscany emerged a multitude of noble families, including the distinguished Amideo family. During the Middle Ages, as populations grew and travel between regions became more frequent, the people of Tuscany found it necessary to adopt a second name to identify themselves and their families. The process of adopting fixed hereditary surnames was not complete until the modern era, but the use of hereditary family names in Italy began in the 10th and 11th centuries. Italian hereditary surnames were developed according to fairly general principles and they were characterized by a profusion of derivatives coined from given names. Although the most common type of family name found in Tuscany is the patronymic surname, which is derived from the father's given name, the nickname type of surname is also frequently found. Nickname surnames were derived from an eke-name, or added name. They usually reflected the physical characteristics or attributes of the first person that used the name. The surname Amideo is a name for a person who derived their name for the Italian phrase che ama Dio, or ama Dio, which means one whom God loves.

Early Origins of the Amideo family

The surname Amideo was first found in Lucca, a city and comune in Tuscany, capital of the province of Lucca where Bascilican type churches abound and where the main branch of the family originates with the Amadi family in the 14th century.

Early History of the Amideo family

This web page shows only a small excerpt of our Amideo research. More information is included under the topic Early Amideo History in all our PDF Extended History products and printed products wherever possible.

Italian surnames come in far more variations than the names of most other nationalities. Regional traditions and dialects are a decisive factor in this characteristic. For example, northern names tend to end in "o", while southern in "i". Also important, but not unique to Italy, was the fact that before dictionaries and the printing press most scribes simply spelled words according to their sounds. The predictable result was an enormous number of spelling variations. The recorded spellings of Amideo include Amaddei, Amaddo, Amado, Amaddìi, Amaddìo, Amade, Amadei, Amadi, Amadini, Amadio, Amedei, Amedeo, Amidei, Amideo, Amoddeo, Amodei and many more.

Prominent among members of the family was Stefano Amedei (1580-1644), an Italian painter of the early Baroque period; Giovanni Amadei of Venice, who was made bishop in 1379. The Amadi family in Venice were made official nobility of the city in 1480. Also during the latter 15th century was Giovanni Antonio Amadeo, a renowned architect and sculptor in Pavia. Girolamo Amadei, born in Siena in 1483, was respected as an author, and had a degree in Theology from the University of Bologna. In 1524 he was elected general of Faenza, a city...
Another 91 words (6 lines of text) are included under the topic Early Amideo Notables in all our PDF Extended History products and printed products wherever possible.

Migration of the Amideo family