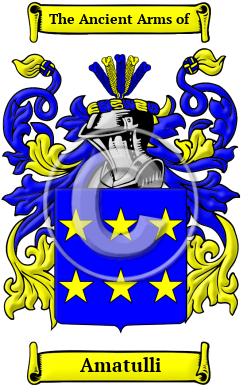 The name Amatulli is derived from the Latin word "amatus," meaning "beloved," and was a popular source of many given names.

Early Origins of the Amatulli family

The surname Amatulli was first found in both northern and southern Italy, as Amati and Amato respectively. The surname Amato was, and is, quite common on the southern island region of Sicily, while Amati is common further north, in Campania, and Emilia-Romagna.

Early History of the Amatulli family

Prominent among members of the family was Ferdinando II, Governor of the people of Ferrara, in 1179; and Nicola Amati or Niccolò Amati (1596-1684), an Italian luthier from Cremona. Amati, a family of celebrated Italian violinmakers, who lived and worked at Cremona, and are generally regarded as the founders of the Cremona school. There is...
Another 54 words (4 lines of text) are included under the topic Early Amatulli Notables in all our PDF Extended History products and printed products wherever possible.

Migration of the Amatulli family