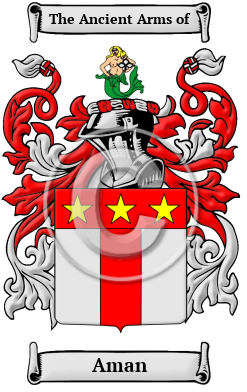 Early Origins of the Aman family

The surname Aman was first found in Switzerland. The name originated from the much honored position of the Landammann, who was the highest official of a Swiss canton (province). But as a surname it became prominent in Bavaria where it branched into many houses, many of which played important roles in tribal and national conflicts, as each group seeking power in an ever-changing territorial profile. The name can be primarily traced to an old noble family from the city of Augsburg; another branch possessed the castle Lauffenberg in the district of Altmuehl. A Bruno Ammann von der Lauffenberg is mentioned in chronicles as early as 1325.

Early History of the Aman family

Spelling variations of this family name include: Amannn, Ammann, Aman, Ammon and others.

Notables of the time with the surname Aman were Jost Ammann (1539-1591), a well-known and much respected woodcarver in Zurich around 1539; Paul Amman (1634-1691), a German physician and botanist; Jakob Ammann (c. 1656-c. 1730), Anabaptist leader...
Another 37 words (3 lines of text) are included under the topic Early Aman Notables in all our PDF Extended History products and printed products wherever possible.

In the United States, the name Aman is the 8,974th most popular surname with an estimated 2,487 people with that name. [1]

Aman migration to the United States +

Aman Settlers in United States in the 17th Century

Aman Settlers in United States in the 19th Century

Aman Settlers in Canada in the 18th Century

Aman Settlers in New Zealand in the 19th Century