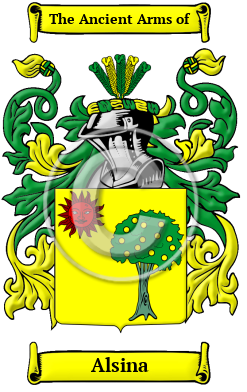 The Spanish surname Alsina is of noble and ancient descent. It appears to be a surname of topographic origin for someone who lived by a "holm-oak." The name Alsina is originally derived from the Spanish word "encina," which in the region of Castile means "oak tree."

Early Origins of the Alsina family

The surname Alsina was first found in the province of Salamanca, in the ancient kingdom of Castile. Early records also show the Alsina family was present in Barcelona in the region of Catalonia in the early Middle Ageas.

Early History of the Alsina family

This web page shows only a small excerpt of our Alsina research. Another 90 words (6 lines of text) are included under the topic Early Alsina History in all our PDF Extended History products and printed products wherever possible.

Spelling variations of this family name include: Encinas, Encina, Alsina, Encinar, Encinosa and others.

Another 36 words (3 lines of text) are included under the topic Early Alsina Notables in all our PDF Extended History products and printed products wherever possible.

Alsina migration to the United States +

Alsina Settlers in United States in the 19th Century