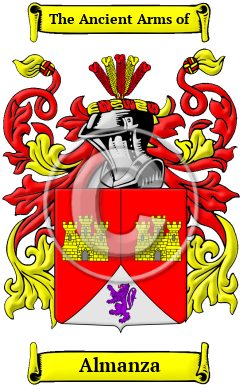 The surname Almanza is the name of a noble family whose roots are Spanish, but has been greatly influenced by the Moorish occupation of the region during the early Middle Ages. The word "almanza" comes from the Arabic words "al-mansa" meaning "the house."

Early Origins of the Almanza family

The surname Almanza was first found in the judicial district of Sahagún, province of León. The surname Almanza was taken from a village of the same name. Its progenitor was Don Lope Díaz de Cinfontes, who took the name "Almanza" for possessing the Lordship of this village. Don Lope was also the Master Guard of the King and is laid to rest in the Grand Chapel of Sotnobal. Over his sepulcher is written the following epitaph: "Here lies Lope Diaz de Cinfontes, Lord of Almanza; God have mercy on his soul..."

Early History of the Almanza family

This web page shows only a small excerpt of our Almanza research. Another 75 words (5 lines of text) covering the years 1393 and 1533 are included under the topic Early Almanza History in all our PDF Extended History products and printed products wherever possible.

Spelling variations of this family name include: Almansa, Almanzan and others.

In the United States, the name Almanza is the 3,760th most popular surname with an estimated 7,461 people with that name. [1]

Almanza migration to the United States +

Almanza Settlers in United States in the 19th Century

Almanza Settlers in United States in the 20th Century