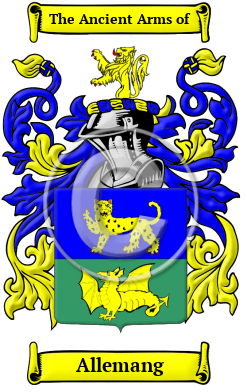 The bountiful region surrounding the Rhine river is the birthplace of the name Allemang. A single name was, at one time, all that people needed. However, increasing ease of travel and the burgeoning populations forced people to adopt a hereditary surname to set themselves apart from others. A common form of surname found in the Rhineland was the local name, a name taken on from a place-name. Originally denoting the proprietorship of a village or estate, the German preposition von, which means from or of, used with local names, was taken as a mark of aristocracy. The surname Allemang was given to someone who lived in the Rhineland which is derived from the Germanic tribal name Alemanni, which means all the men. The Alemanni, who originally inhabited the Rhineland, played a large role in the early tribal conflicts of the area and they engaged in bitter battles with the Franks for domination of territory. The English variation Allemang is also the name for someone from Germany, derived from the Anglo-Norman French word aleman, which means German, or Allemagne, which means Germany. In some cases, the name may have been from the southern regions of France that border Germany, such as Norman region of Allemagne which was named by the Germanic settlers there, or Alsace-Lorraine. Alman is also a Jewish Ashkenazic surname taken by a widower. In the Middle Ages, the Allemang family played an influential role in the social, economic and political development of the territories of the Rhineland.

Early Origins of the Allemang family

The surname Allemang was first found in the Rhinelands, where the name contributed greatly to the development of an emerging nation which would later play a large role in the tribal and national conflicts of the area. In later years the name branched into many houses, each playing a significant role in the local social and political affairs. The name is associated with the Alsace-Lorraine region on the southern French-German border; the Alemanns were the Germanic tribes that anciently inhabited this region.

Early History of the Allemang family

In the medieval era, many different cultural groups lived in the German states. There are thus many regional variations of German surnames from that era. Westphalians spoke Low German, which is similar to modern Dutch. Many German names carry suffixes that identify where they came from. Others have phrases attached that identify something about the original bearer. Other variations in German names resulted from the fact that medieval scribes worked without the aid of any spelling rules. The spelling variations of the name Allemang include Alemann, Allemann, Aleman, Alemand, Allemand, Alemanns, Allemang and many more.

Notables with the name Allemang during this period were Johann Martin Alemann, descendant of a Magdeburg noble family, who was ennobled as mayor of this city in 1602, a title recognized in Prussia...
Another 32 words (2 lines of text) are included under the topic Early Allemang Notables in all our PDF Extended History products and printed products wherever possible.

Migration of the Allemang family

The great European flow of migration to North America, which began in the middle of the 17th century and continued into the 20th century, was particularly attractive to those from the Rhineland who wished to escape either poverty or religious persecution. Many of those who left the Rhineland to seek their fortunes in the prosperous and free New World settled in the major urban centers of the United States and Canada. In the United States, the settlers from the Rhineland passed through immigration centers like that of Ellis Island, most of them moving on to Pennsylvania, Ohio, Texas, Illinois, California, and New York. In Canada, the majority of Rhinelanders settled in Ontario and the prairie provinces. An examination of passenger and immigration lists has revealed many important settlers to North America bearing the name Allemang, or one of its variants above: Johan Christian Aleman, who arrived in Philadelphia in 1753; as did Heinrich Allman in 1764; Ernest Alemann settled in Philadelphia in 1853.