The name Alexandrov is a patronymic surname formed by adding one of the many Russian suffixes, such as "-ov" and "-ovic" to the either of the personal names Alexander, (forms of which were widely popular throughout Europe in the Middle Ages due to Alexander the Great (356-323 BC); or Aleksei in Russia. Alexander comes from the Greek Alexandros, which originally meant "defender of men." Aleksei is from the Greek alexios, which meant "helping or defending."

Early Origins of the Alexandrov family

The surname Alexandrov was first found in Russia, where the name was born by members of the population of the Russian Empire.

Early History of the Alexandrov family

This web page shows only a small excerpt of our Alexandrov research. Another 69 words (5 lines of text) covering the years 1266, 1370, 1348, 1511 and 1801 are included under the topic Early Alexandrov History in all our PDF Extended History products and printed products wherever possible. 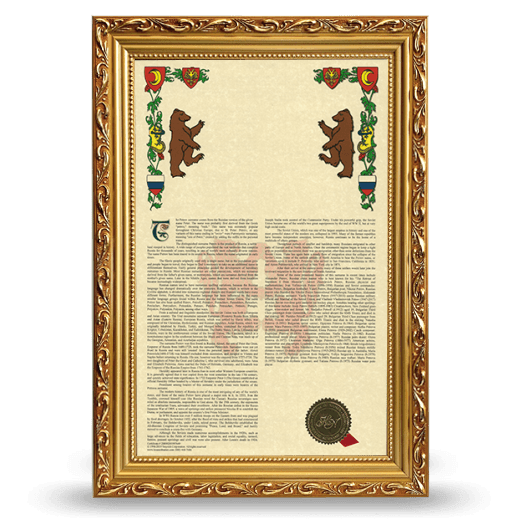 More information is included under the topic Early Alexandrov Notables in all our PDF Extended History products and printed products wherever possible.

In Russia, the name Alexandrov is the 853rd most popular surname with an estimated 21,437 people with that name. [1]

Migration of the Alexandrov family