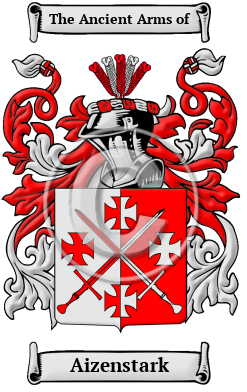 The prominent surname Aizenstark is a proud symbol of Jewish heritage. Before the late Middle Ages, people were known only by a single name. However, as the population increased and travelers set out on their journeys, it became necessary for people to adopt a second name to identify themselves. Jewish hereditary surnames were adopted from a variety of different sources. There are three possible derivations of the surname Aizenstark. In the first case, it may be a metonymic occupational name for an ironworker or smith, derived from the Yiddish word ayzn, and the German word eisen, which means iron. Another interpretation suggests that this surname is of patronymic origin, and derived from the surname Isaac. A third alternative suggests that the surname Aizenstark is an ornamental surname. This explanation comes from the fact that there are many compound names, such as Eisenstein, which means iron stone.