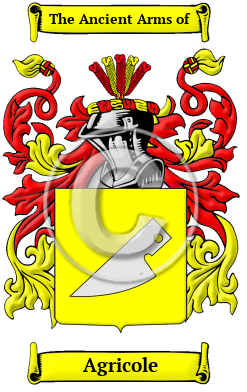 The Agricole family originated in Bavaria, Germany. As hereditary surnames were adopted in that area beginning in the 12th century, people were often identified by the kind of work they did. Agricole is an occupational name for a farmer. Agricole is the Latin form of the name Bauer, Baumann, Ackermann, or Schnitter, which are all associated with the farming profession. The root word of the name Agricole is recognizable in the modern word agriculture.

Early Origins of the Agricole family

The surname Agricole was first found in Nuremberg, where the name was associated with a patrician family of the region. They contributed greatly to the development of an emerging nation which would later play a large role in the tribal and national conflicts of the area. In later years the name branched into many houses, each playing a significant role in the local social and political affairs. Agricola is the Latin form of the name Bauer, Baumann, Ackermann, or Schnitter; all these names designate the farming profession. Bauer means farmer, and the name Agricola is seen in our term agriculture.

Early History of the Agricole family

Many cultural groups lived in the German states in medieval times. Each had its own dialect and traditions, and unique variations of popular names. Low German, which is similar to contemporary Dutch, was spoken in Westphalia. German names are characterized by additions such as regional suffixes and phrases that tell something about the origin or background of its original bearer. Further contributing to the variation in German names was the fact that there were no spelling rules in medieval times: scribes recorded names according to their sound. The recorded spelling variations of Agricole include Agricola, Agricolas, Aggricola, Agricole and many more.

Prominent among members of the name Agricole in this period include Alexander Agricola (c.1445-1506), a Franco-Flemish composer of the Renaissance; Martin Agricola (1486-1556), who was a prominent and influential...
Another 28 words (2 lines of text) are included under the topic Early Agricole Notables in all our PDF Extended History products and printed products wherever possible.

Migration of the Agricole family

The great European flow of migration to North America, which began in the middle of the 17th century and continued into the 20th century, was particularly attractive to those from Bavaria who wished to escape either poverty or religious persecution. For many Bavarian tenant farmers, the chance to own their own land was a major incentive. So the widespread colonization of the United States began in 1650, when many immigrants from Germany settled in pockets in Pennsylvania, Texas, New York, Illinois, and California. In Canada, German settlement centered in Ontario and the prairie provinces. Among those of this surname listed in various historical records were: Ludwig Agricola, who settled in Philadelphia in 1763.