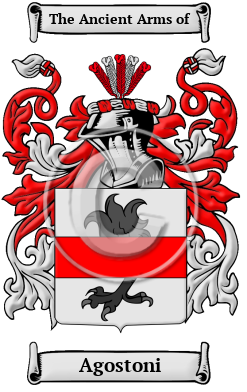 The Emilia Romagna region of Italy is the locale where the Agostoni surname was first found. Although the people in this region were at one time known by only a single, personal name, it later became necessary for them to adopt a second name to identify themselves as populations grew and travel became more frequent. The process of adopting fixed hereditary surnames was not complete until the modern era, but the use of hereditary family names in Italy began in the 10th and 11th centuries. Agostoni is one of the Italian patronymic surnames, created from the father's given name. The surname Agostoni came from the personal name Agostino. This personal name is derived from the Latin word "augustus," which means "favored with good omens."

Early Origins of the Agostoni family

The surname Agostoni was first found in Ferrara, a city and comune in Emilia-Romagna, northern Italy, capital city of the Province of Ferrara. One of the first records of the name was Eugenio Agostini who was listed there in 923. Also around this time, Alessandro Agostini was secretary of the Duke and another Alessandro Agostini, of the same family in Ferrara, was the Councillor of Alfonso I.

Early History of the Agostoni family

This web page shows only a small excerpt of our Agostoni research. More information is included under the topic Early Agostoni History in all our PDF Extended History products and printed products wherever possible.

In comparison with other European surnames, Italian surnames have a surprising number of forms. They reflect the regional variations and the many dialects of the Italian language, each with its own distinctive features. For example, in Northern Italy the typical Italian surname suffix is "i", whereas in Southern Italy it is "o". Additionally, spelling changes frequently occurred because medieval scribes and church officials often spelled names as they sounded rather than according to any specific spelling rules. The spelling variations in the name Agostoni include Agosta, Agostani, Agostaro, Agostena, Agosti, Agostinetti, Agostini, Agostinis, Agostino, Agostinone, Agosto, Agostoni, Agustoni, Augusti, Augusto, Augustoni, D'Agostino, DeAgostini and many more.

Prominent among members of the family was Guido Agosti of Brescia who was in the council; Obizzo Agosti was supreme Captain of the Brescian military; Lodovico Agosti was Archbishop of Spalato in the 12th century; in the 13th century Girolamo Agosti was given the titles of Count and Knight, which continued through his descendants until 1618; Agnolo Agostino was a renowned architect in the 13th century who designed the Porta Romagna and the Church of St. Francis in Siena. Mariano and Paolo Agostini, brothers, were among the leaders of the Pisan government, and their ancestors maintained their positions for many more...
Another 216 words (15 lines of text) are included under the topic Early Agostoni Notables in all our PDF Extended History products and printed products wherever possible.

Migration of the Agostoni family

Discovered in the immigration and passenger lists were a number of people bearing the name Agostoni: Querine Agostino, who arrived in Philadelphia, Pennsylvania in 1878, and Antonio Augustino, who settled in Seneca Falls, New York sometime between 1884 and 1915.