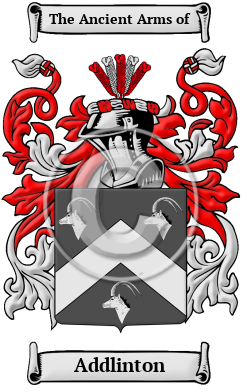 Early Origins of the Addlinton family

The surname Addlinton was first found in Lancashire at Adlington, a small town and civil parish that dates back to the Domesday Book of 1086 where it was first listed as Eduluintune. [1] Adlington was part of the Penwortham barony granted to Randle de Marsey and later held by the Ferrers. The place name literally means "estate associated with a man called Eadwulf," from the Old English personal name + "ing" + "tun." [2] "The Adlington family held lands here in the reign of Edward II, and for many subsequent generations." [3] In 1202 Walter de Adlington granted six oxgangs of land to Siward de Duxbury. By 1288, Hugh de Adlington and Adam de Duxbury each held a moiety of the manor of William de Ferrers. Adlington Hall was a grand Georgian country house but was demolished in the 1960s. Adlington, Cheshire is a village and civil parish and home to Adlington Hall, a country house with a great hall that was constructed between 1480 and 1505. This latter village was ancestral home to the Leghs.

Early History of the Addlinton family

This web page shows only a small excerpt of our Addlinton research. Another 110 words (8 lines of text) covering the years 1567, 1613 and 1664 are included under the topic Early Addlinton History in all our PDF Extended History products and printed products wherever possible.

More information is included under the topic Early Addlinton Notables in all our PDF Extended History products and printed products wherever possible.

Migration of the Addlinton family

The New World beckoned settlers from the Scottish-English borders. They sailed aboard the armada of sailing ships known as the "White Sails" which plied the stormy Atlantic. Some called them, less romantically, the "coffin ships." Among the early settlers bearing the Addlinton surname who came to North America were: George Adlington, who arrived in Baltimore in 1758; William Adlington, who came to Philadelphia in 1865; and Chas Addlington, who was on record in Toronto in 1871..