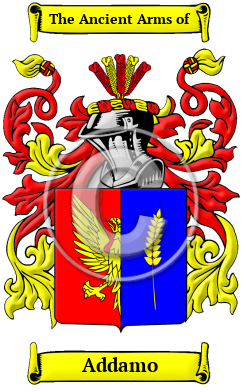 Early Origins of the Addamo family

The surname Addamo was first found in Fermo, a city found on the coast of the Adriatic Sea.

Early History of the Addamo family

This web page shows only a small excerpt of our Addamo research. Another 31 words (2 lines of text) covering the years 1221, 1603, 1663, 1663 and 1711 are included under the topic Early Addamo History in all our PDF Extended History products and printed products wherever possible.

Italian surnames come in far more variations than the names of most other nationalities. Regional traditions and dialects are a decisive factor in this characteristic. For example, northern names tend to end in "o", while southern in "i". Also important, but not unique to Italy, was the fact that before dictionaries and the printing press most scribes simply spelled words according to their sounds. The predictable result was an enormous number of spelling variations. The recorded spellings of Addamo include Adami, Adàm, Adam, Adamli, Adamoli, Adamlli, Adamolli, Adamollo, Adamuccio, Adamina, D'Adamo, Adamic, Addamo, Adamini, Adàmoli, Adamino and many more.

Prominent among members of the family was Beato Adamo, a colonel of great valor during the 13th century; Adam Adami, O.S.B. (1603-1663), a German monk, diplomat and priest; Andrea Adami, born in Bolsena in 1663 was a singer at the Pontifical Chapel of...
Another 42 words (3 lines of text) are included under the topic Early Addamo Notables in all our PDF Extended History products and printed products wherever possible.

Migration of the Addamo family

Amongst the settlers in North America with this distinguished name Addamo were Martin Adami, who moved to the U.S. along with his family in 1851; Herman Adami sailed to New York with his wife in 1850; Felice Adami sailed to America in 1855.