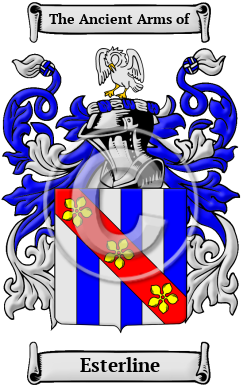 There has been suggestion that the Esterline surname arrived in Britain with the Danes, well before 1066. However, it seems that at least one line of Esterline returned to Britain after 13th century crusades, deriving from Strattligen, Switzerland.

Early Origins of the Esterline family

The surname Esterline was first found in Warwickshire. Early on, Sir Peter Stradling, who already held Neath Castle, Glamorgan, Wales, married Joan de Hawey, heiress of St Donat's Castle. He also acquired estates in Somerset and Dorset. In some instances, the surname was Latinized Easter Lingus which was corrupted to Estarling. First on record appears to be sir John Stradling (circa 1230-1293).

Early History of the Esterline family

Notable amongst the Clan from early times was Sir Edward Stradling (1529-1609), English scholar and patron of literature, the eldest son of Sir Thomas Stradling (1498?-1571); Sir John Stradling, 1st Baronet (1563-1637), a British poet, scholar and politician, Sheriff of Glamorgan from 1608 to 1620; Sir Edward Stradling, 2nd Baronet (1601-1644), a Welsh politician, Member of Parliament...
Another 57 words (4 lines of text) are included under the topic Early Esterline Notables in all our PDF Extended History products and printed products wherever possible.

Esterline migration to the United States +

Esterline Settlers in United States in the 20th Century