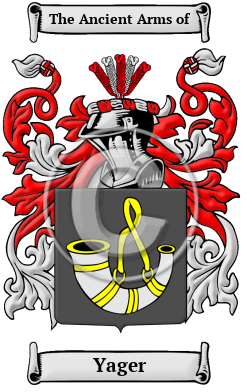 In the ancient German province of Westphalia, the surname Yager evolved. It is a nickname, a style of hereditary surname that developed out of the traditional German eke-names, that identified people by naming them after a physical characteristic or other identifiable trait. Yager is a name for a person who was known for his prowess and wisdom as a hunter. The name Yager is derived from the German word "jage," which is derived from Old German word "jagen," which means "to hunt." Hunting was considered a knightly pursuit during the feudal era.

Early Origins of the Yager family

The surname Yager was first found in the county of Mark (Dortmund,) where the family was anciently associated with the political and religious conflicts of the area. They declared allegiances to many nobles and princes of early history, lending their influence in struggles for power and status within the region. The family founded numerous branches, many of which acquired manors and estates in surrounding regions, where they contributed to the prosperity of their society. Ancient chronicles first mention a branch of the family acquiring the estates of Kaackstedt and Ringenwalde in the district of Templin around 1376, and the estate of Zehlendorf in the district of Nieder-Barnim, around 1451. Venator, the Latin form of the name, often appears in chronicles in place of Jaeger.

Early History of the Yager family

This web page shows only a small excerpt of our Yager research. Another 336 words (24 lines of text) covering the years 1678, 1698, 1771, 1780, and 1843 are included under the topic Early Yager History in all our PDF Extended History products and printed products wherever possible.

One can encounter great variation in the spelling of surnames: in early times, spelling in general, and thus the spelling of names was not yet standardized; and later, spellings would change with branching and movement of families. Variations of the name Yager include Jaeger, Jeger, Jager, Jaegger, Jegger, Jagger, Jaegers, Jagers, Jaggers, Jaeggers and many more.

Notables of the period with the name Yager were Heinrich Christroph Jaeger, who was a professor of law in Passau and Privy Councillor and royal advisor to the Prince...
Another 29 words (2 lines of text) are included under the topic Early Yager Notables in all our PDF Extended History products and printed products wherever possible.

In the United States, the name Yager is the 5,212nd most popular surname with an estimated 4,974 people with that name. [1]

Yager migration to the United States +

Yager Settlers in United States in the 18th Century

Yager Settlers in United States in the 19th Century

Yager Settlers in Canada in the 19th Century