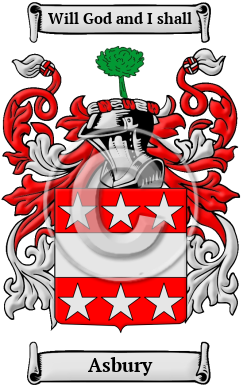 In ancient Anglo-Saxon England, the ancestors of the Asbury surname lived in Ashbourne, Derbyshire; in Ashburnham, Sussex; or in Ashburton, Devon. [1]

Early Origins of the Asbury family

The surname Asbury was first found in Derbyshire, at Ashbourne, a market town in the Derbyshire Dales now famous for its historic annual Shrovetide football match. The first record was found in the Domesday Book where it was listed as Esseburne, having derived from the Old English aesc + burna, meaning "stream where the ash-trees grow." [2]

The name dates back to pre- Domesday Book times, when it was known as Aescburnan in 1008. [3]

"There can be little no doubt, however, that the Ashburnhams have been seated at Ashburnham from the reign of Henry II, and probably from a much earlier period, and are descended from Bertram, Constable of Dover in the reign or William the Conqueror. " [4]

"The manor [of Ashburnham in Sussex], with the exception only of a few years, has been from a time anterior to the Conquest in the continued possession of the noble family of Ashburnham, whose mansion-house here is beautifully situated, and surrounded by a fine park. The church, situated behind Ashburnham House, is a neat cruciform edifice in the decorated English style, with a tower; the south transept contains a gallery for the family, and in the north are handsome monuments to William and John Ashburnham, and their wives." [5]

Sifting through early rolls, we found Robert de Assheboume in Devon in 1311 and years later, John de Ascheburn in Yorkshire in 1349. [3]

Early History of the Asbury family

It is only in the last few hundred years that the English language has been standardized. For that reason, early Anglo-Saxon surnames like Asbury are characterized by many spelling variations. As the English language changed and incorporated elements of other European languages, even literate people changed the spelling of their names. The variations of the name Asbury include: Ashburnham, Asbury, Astbury, Ashburner, Ashbourn, Ashburn, Ashburnam, Ashburham, Ashbourne and many more.

Distinguished members of the family include John Ashburnham (1603-1671), an English courtier, diplomat, politician and an attendant on the King, he managed to regain his ancestral estate of Ashburnham in 1639; and his younger brother, William Ashburnham (ca. 1604-1679), an English army officer; and Sir Denny Ashburnham, 1st Baronet (c 1628-1697), an English landowner and politician, Member of Parliament for Hastings (1660-1679) and (1685-1689.) Joseph Ashbury (1638-1720), was an English actor and theatrical manager. "Born in London in 1638, he was of good family, educated at Eton, and entered...
Another 87 words (6 lines of text) are included under the topic Early Asbury Notables in all our PDF Extended History products and printed products wherever possible.

Asbury migration to the United States +

Many English families tired of political and religious strife left Britain for the new colonies in North America. Although the trip itself offered no relief - conditions on the ships were extremely cramped, and many travelers arrived diseased, starving, and destitute - these immigrants believed the opportunities that awaited them were worth the risks. Once in the colonies, many of the families did indeed prosper and, in turn, made significant contributions to the culture and economies of the growing colonies. An inquiry into the early roots of North American families has revealed a number of immigrants bearing the name Asbury or a variant listed above:

Asbury Settlers in United States in the 17th Century

Asbury Settlers in United States in the 19th Century

Asbury Settlers in Australia in the 19th Century