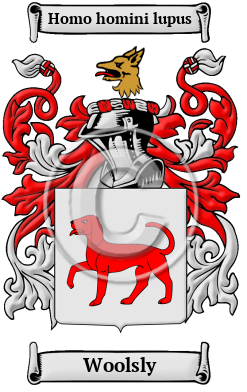 Early Origins of the Woolsly family

The surname Woolsly was first found in Staffordshire at Wolseley, a hamlet in the hundred of Pirehill which dates back to at least the Domesday Book where it was listed as Ulselei. [1]

It was land held by the Bishop of Chester and was quite small having 4 villans, 2 borders with 1 plough and 3 acres of meadows. Over the centuries the hamlet has remained quite small. A census taken in the 1800s lists only 133 inhabitants.

The hamlet includes the small village of Wolseley-Bridge, and about half a mile west of the bridge stands Wolseley Hall, the family manor with a stately facade crowned with an embattled parapet. The interior is embellished with beautifully-carved oak panels that date back to the time of Charles II. The family was "the most ancient among all the very ancient families in this county" and are "said to have been resident at Wolseley even before the Norman Conquest, and it has ever since remained their seat and residence." [2]

One of the earliest records of the family was Robert de Wolsley, vicar of Addingham in Craven, 1353. [3]

Early History of the Woolsly family

Spelling variations of this family name include: Wolseley, Wolsley, Woolsley, Wolsey, Woolsey and many more.

Notables of this surname at this time include: Cardinal Thomas Wolsey (c. 1473-1530), English prelate, Archbishop of York, Primate of England (1514-1529), Lord Chancellor to Henry VIII; Sir Robert Wolseley, (c. 1587-1646), created a Baronet by Charles I in 1628; and his son, Sir Charles Wolseley, 2nd Baronet (ca.1630-1714)...
Another 49 words (4 lines of text) are included under the topic Early Woolsly Notables in all our PDF Extended History products and printed products wherever possible.

Migration of the Woolsly family to Ireland

Some of the Woolsly family moved to Ireland, but this topic is not covered in this excerpt.
Another 42 words (3 lines of text) about their life in Ireland is included in all our PDF Extended History products and printed products wherever possible.

Migration of the Woolsly family