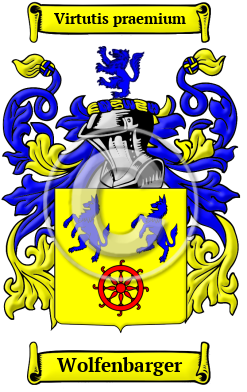 Early Origins of the Wolfenbarger family

The surname Wolfenbarger was first found in the Rhineland, where the name emerged in mediaeval times as one of the notable families of the region. From the 13th century on the surname spread to nearly all parts of Germany, and was identified with the great social and economic evolution that contributed to the development of the nation. Chronicles mention Nivelung Wolf of Cologne as early as 1135, and Elbel Wolf of Bruenn in Moravia in 1365, showing the gradual eastward movement of the branches.

Early History of the Wolfenbarger family

One can encounter great variation in the spelling of surnames: in early times, spelling in general, and thus the spelling of names was not yet standardized; and later, spellings would change with branching and movement of families. Variations of the name Wolfenbarger include Wolf, Wolff, Wolfen, Wolfe, Wulf and others.

Notables with the name Wolfenbarger during this period were Reginald or Reyner Wolfe (d. 1573), printer and publisher, a native of Strasburg. However, "in both France and Germany many early printers bore the same surname: George Wolfe of Baden, printed at Paris from 1491 to 1499; Nicholas Wolfe at Lyons, in 1498 and 1499; and Thomas Wolfe at Basle in 1527. But Reyner was probably most closely related to John Wolfe, a printer of Zurich...
Another 74 words (5 lines of text) are included under the topic Early Wolfenbarger Notables in all our PDF Extended History products and printed products wherever possible.

In the United States, the name Wolfenbarger is the 8,773rd most popular surname with an estimated 2,487 people with that name. [1]

Wolfenbarger migration to the United States +

Hundreds of thousands of Europeans, including many Rhinelanders, made the voyage to North America between the 17th and 20th centuries. It was an escape from religious persecution and poverty and also an opportunity for people to start over and own their own land. Most landed at Ellis Island, off New York before moving on to the states of Pennsylvania, Ohio, Texas, Illinois, and California. Some also landed in Canada and settled in Ontario, while others headed west to the prairie provinces. A study of passenger and immigration lists has shown a number of people bearing the name of Wolfenbarger, or one of its variants, reaching North America shores very early:

Wolfenbarger Settlers in United States in the 20th Century