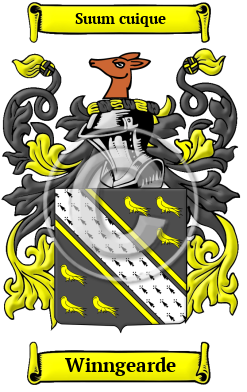 Early Origins of the Winngearde family

The surname Winngearde was first found in Durham where they held a family seat at Wingate (now Wingate-Grange), in the parish of Kelloe. [1] [2]

Early History of the Winngearde family

Notable amongst the family name during their early history was Ninian Winzet, Winyet or Wingate (1518-1592), Scottish controversialist, born in Renfrew. "Families of the same name held property and rented lands in Glasgow and the vicinity. " [6] Edmund Wingate (1596-1656), was an English mathematical and legal writer, one of the first to publish in the 1620s on the principle of the...
Another 61 words (4 lines of text) are included under the topic Early Winngearde Notables in all our PDF Extended History products and printed products wherever possible.

Migration of the Winngearde family