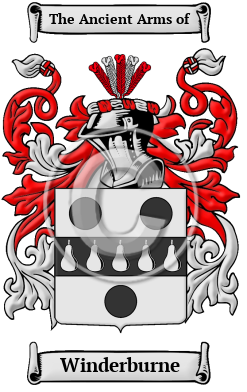 The Winderburne surname is generally thought to have been taken on from the various places so named in Britain. The place names derive from the Old English "winter" and "burn," meaning "stream;" thus denoting a stream that dries up in summer. [1]

Early Origins of the Winderburne family

The surname Winderburne was first found in Gloucestershire where the Parish of Winterbourne predates its entry in Domesday Book, [2] and where there was a manor house of this name from very ancient times, before and after the Norman Conquest. One of the first on record was Henry de Winterburna who was listed in the Pipe Rolls of 1175 in both Dorset and Somerset. [3]

Walter Winterbourne (1225?-1305), was an early English cardinal who "probably took his family name from one of the numerous villages called Winterbourne in the immediate proximity of Salisbury. He was born about 1225 at Old or New Sarum. " [4]

There are at least nine parishes named Winterbourne or having the same prefix throughout Britain. [5] All nine were listed in the Domesday Book. Some denote the family that held estates there as in Winterbourne Bassett in Wiltshire, Winterbourne Houghton, Winterbourne Strickland and Winterbourne Zelston, all in Dorset.

Walter of Winterburn (died 1305) was an English Dominican, cardinal, orator, poet, philosopher, and theologian. King Edward I chose him as his confessor and spiritual director and was created cardinal on February 21, 1304, by Pope Benedict XI.

Early History of the Winderburne family

This web page shows only a small excerpt of our Winderburne research. Another 77 words (6 lines of text) covering the years 1230, 1571, 1634, 1688, 1625 and 1649 are included under the topic Early Winderburne History in all our PDF Extended History products and printed products wherever possible.

Spelling variations of this family name include: Winterburn, Winterburne, Winterborn and others.

Another 33 words (2 lines of text) are included under the topic Early Winderburne Notables in all our PDF Extended History products and printed products wherever possible.

Migration of the Winderburne family

Some of the first settlers of this family name or some of its variants were: Elizabeth Winterburn and her husband who settled in New England in 1676; William Winterbourne, who arrived in Jamaica in 1737; John Winterburn, who arrived in America in 1764.