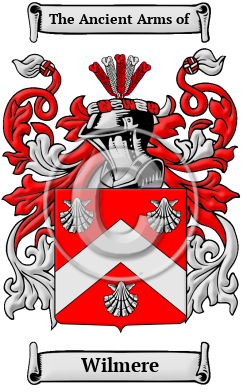 Early Origins of the Wilmere family

The surname Wilmere was first found in Hampshire at Woolmer, between Liphook and Bordon. The surrounding Woolmer (Wolmer) Forest, is a Royal forest. Woolmer Green is a small village and civil parish in Hertfordshire.

"The surname is more probably from the Anglo-Saxon personal name Wulmer." [1]

The earliest record of the family was found at the time of the Domesday Book of 1086 when Wlmer, Vlfmer, Wlmer were all listed at that time [2] A few years later, Ulmer Aeltredes was listed in Suffolk c. 1095. [3] This latter source also notes that the name could have been derived "from a lost Wolmoor in Ormskirk, Lancashire 'wolves moor'. " [3] But he also concurs that the aforementioned Woolmer Forest origin may be a possibility. Woolmore Fram in Melksham, Wiltshire was derived from "wolves' pool."

Early History of the Wilmere family

Outstanding amongst the family at this time was Richard Wolman or Woleman (d. 1537), English divine, Dean of Wells, presumed to have been the son of Richard Wolman, cater to John Howard, duke of Norfolk. "There was a family of the name at Alderford, Norfolk. In 1478 Richard Wolman was a member of Corpus Christi College, Cambridge. He also studied abroad, being entered in the...
Another 64 words (5 lines of text) are included under the topic Early Wilmere Notables in all our PDF Extended History products and printed products wherever possible.

Migration of the Wilmere family