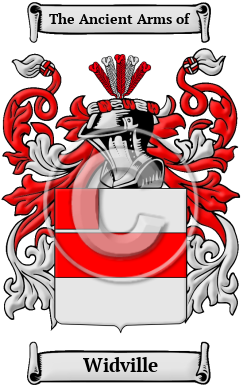 Early Origins of the Widville family

The surname Widville was first found in Northamptonshire. The family is originally from "Widville, Guidoville, or Viville, which was held from the De Toesnis in Normandy. Hugh de Guidville came to England in 1066, and by 1086 held lands in Northantshire and Leicestershire [1]. Robert, his son, temp. Henry I., granted the tithes of Guidoville to Conches Abbey, with consent of Ralph de Toesni, and in 1130 held the estates of Roger de Mowbray in farm from the Crown according to the Pipe Rolls. He had, 1. Ralph, father of Robert de VVithville, whose brother William de Widville of Northants 1165 [2] and was ancestor of the Earls Rivers; 2. William, whose son, Richard de Withville, held five knight's fees in York from Mowbray, and half a fee in capite [2]. He was a benefactor to Byland Abbey. Walter de Widville occurs temp. Richard I; and William, son of William de Wyville, in 1299 confirmed his ancestor's gifts to Byland Abbey. From this line descend the Baronets Wyville." [3]

Early History of the Widville family

Outstanding amongst the family at this time was Sir Marmaduke Wyvill (c. 1542-1617), Vice Chamberlain of the Household to Queen Elizabeth, was created a Baronet in 1611, and towards the end of James I.'s reign, removed to Constable-Burton, their present seat. The next Sir Marmaduke (died c. 1648) suffered heavily for his loyalty during the Civil War ; his house was twice sacked by Cromwell's troopers, and he was mulcted of upwards of £1,300 as composition for his estate. The last in succession was the seventh baronet—again Sir Marmaduke—who died a bachelor in 1774. His sister had married her cousin, the...
Another 110 words (8 lines of text) are included under the topic Early Widville Notables in all our PDF Extended History products and printed products wherever possible.

Migration of the Widville family