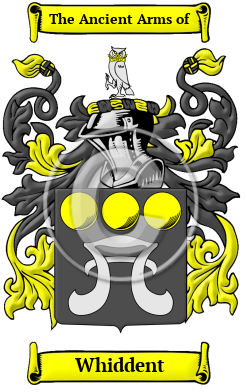 Early Origins of the Whiddent family

The surname Whiddent was first found in various shires throughout ancient Britain. The name Whitton literally means "white farmstead," or "farmstead of a man called Hwita," from the Old English words "hwit," + "tun. [1] [2]

Early History of the Whiddent family

Notable amongst the family name during their early history was Michael Whitton, Chief Forester of the Kings Forest of Selkirk in 1303. [7] Sir John Whiddon (d. 1576), was an English judge, the eldest son of John Whiddon of Chagford in Devonshire, where his family had long been established. [8] Jacob Whiddon (fl. 1585-1595), was an English sea-captain, "a trusted servant and follower of Sir Walter Raleigh (Ralegh), who speaks of him as 'a man most valiant and honest,' seems to have been with Sir Richard...
Another 84 words (6 lines of text) are included under the topic Early Whiddent Notables in all our PDF Extended History products and printed products wherever possible.

Migration of the Whiddent family