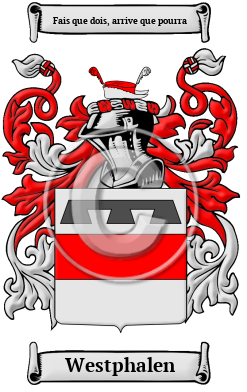 Nestled between the Rhine and Wesser rivers is the ancient German region of Westphalia. Westphalia, the home of the name Westphalen. When hereditary surnames were adopted in this region, after the 12th century, names that were derived from localities were quite common. These "local" surnames originally denoted the proprietorship of the village or estate. When coupled with the German preposition von, which means from or of, local names can indicate that the initial bearer of the name was an aristocrat. However, in modern times, the use of the preposition has often long since been dropped from use. The Westphalen family originally lived in Westphalia. The original bearer of this name was born in Westphalia, but acquired the name Westphalen after migrating to a different German territory. As a general rule, the greater the distance between an individual and their homeland, the larger the territory they were named after. For example, a person who only moved to another parish would be known by the name of their original village, while people who migrated to a different country were often known by the name of a region or country from which they came.

Early Origins of the Westphalen family

The surname Westphalen was first found in Westphalia and the Rhineland, where the name could be considered to make a great early contribution to the feudal society which became the backbone of early development of Europe. The name Westphalen became prominent in local affairs, and branched into many houses which played important roles in the tribal and national conflicts, as each group sought power in a constantly changing territorial profile. The oldest branch of the family can be traced to the ducal house von Billung, which dates back to 960. From very early on the family emigrated to Pomerania and Mecklenburg, and chronicles first mention the individuals Egbert Westfal of Stralsund in 1294 and Johann Westfeleke of Greifswald in 1350.

Early History of the Westphalen family

One can encounter great variation in the spelling of surnames: in early times, spelling in general, and thus the spelling of names was not yet standardized; and later, spellings would change with branching and movement of families. Variations of the name Westphalen include Westphall, Westphal, Westfehling, Fehling, Westfahl, Westfeleke (Silesia), Westphalen, Westfall, Westfalen and many more.

Notables of the period with the name Westphalen were many prominent descendents of the House von Billung line. They include Clemens August Wilhelm von Westphalen (1726-1778), Privy Councellor at Hildesheim and Paderborn, his son Clemens August Wilhelm (1754-1818), Grand Prior of the St. Johann Order of Knights, who became Count of the castle at Friedberg, and his...
Another 57 words (4 lines of text) are included under the topic Early Westphalen Notables in all our PDF Extended History products and printed products wherever possible.

Westphalen migration to the United States +

Westphalen Settlers in United States in the 18th Century

Westphalen Settlers in United States in the 19th Century