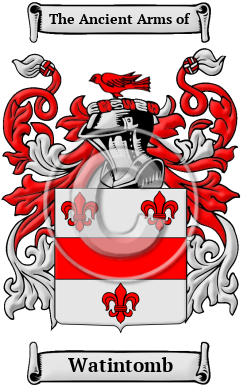 The Norman Conquest of England in 1066 added many new elements to an already vibrant culture. Among these were thousands of new names. The Watintomb family lived in Yorkshire, at Wadding. This was a local name, derived from the place-name Wadding. In general, local names were adopted by families when they moved to another area. This distinguished them from other people that had the same name. As people began moving closer together, it became more important to be able to identify people from one another.

Early Origins of the Watintomb family

The surname Watintomb was first found in Yorkshire where they were Lords of the manor of Waddington, a village and parish near Clitheroe. "It is natural to find the name crossing the border into Lancashire. This surname has ramified very strongly in the Northern counties." [1] Indeed another source claims the family did in fact originate in Lancashire: "The Waddingtons, who are also established in Lancashire, have their principal home in the West Riding, where occur a village and a seat of the name." [2]

Early History of the Watintomb family

This web page shows only a small excerpt of our Watintomb research. Another 60 words (4 lines of text) covering the years 1670, 1731, 1670, 1671, 1687, 1724 and 1731 are included under the topic Early Watintomb History in all our PDF Extended History products and printed products wherever possible.

Norman surnames are characterized by a multitude of spelling variations. The frequent changes in surnames are largely due to the fact that the Old and Middle English languages lacked definite spelling rules. The introduction of Norman French to England, as well as the official court languages of Latin and French, also had pronounced influences on the spelling of surnames. Since medieval scribes and church officials recorded names as they sounded, rather than adhering to any specific spelling rules, it was common to find the same individual referred to with different spellings. The name has been spelled Waddington, Waddleton, Waddingworth and others.

Outstanding amongst the family at this time was Edward Waddington (1670?-1731), English divine, Bishop of Chichester, born in London in 1670 or 1671. "He was educated at Eton College, and was admitted a scholar of King's College, Cambridge, on 30 June 1687. On 11 Oct. 1724 he was...
Another 47 words (3 lines of text) are included under the topic Early Watintomb Notables in all our PDF Extended History products and printed products wherever possible.

Migration of the Watintomb family to Ireland

Some of the Watintomb family moved to Ireland, but this topic is not covered in this excerpt. More information about their life in Ireland is included in all our PDF Extended History products and printed products wherever possible.

Migration of the Watintomb family

Many English families emigrated to North American colonies in order to escape the political chaos in Britain at this time. Unfortunately, many English families made the trip to the New World under extremely harsh conditions. Overcrowding on the ships caused the majority of the immigrants to arrive diseased, famished, and destitute from the long journey across the stormy Atlantic. Despite these hardships, many of the families prospered and went on to make invaluable contributions to the development of the cultures of the United States and Canada. Early North American immigration records have revealed a number of people bearing the name Watintomb or a variant listed above: Hannah Waddington who settled in Virginia in 1635; John Waddleton settled in St. John's Newfoundland in 1789; Ralph Waddington settled in Virginia in 1653.