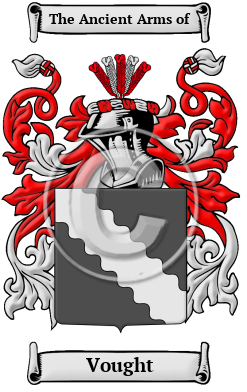 The surname Vought originates in the Latin form "vocatus" or "advocatus"and referred to someone who appeared in court on another's behalf. As a surname, Vought is an occupational hereditary surname for a bailiff or overseer of a nobleman's estate.

Early Origins of the Vought family

The surname Vought was first found in central Germany, including Bavaria, Franconia, Hessen, and the Paltinate, where the name was anciently associated with the tribal conflicts of the area. They declared allegiances to many nobles and princes of early history, lending their influence in struggles for power and status within the region. They branched into many houses, and their contributions were sought by many leaders in their search for power. The oldest recorded individual of the many branches of this family was Johann Vogt von Hunolstein, who lived around 1080 and brought the family to the Rhine valley. There, the family's castle Hunolstein (four miles from Trier) prospered until 1523, when Franz von Sickingen laid the castle to ruins in his feud against the princes of Trier. They then moved into Lorraine where they eventually became counts. The other branches of Franconia and Hessen had divided off even before the 10th century.

Early History of the Vought family

This web page shows only a small excerpt of our Vought research. Another 209 words (15 lines of text) covering the years 1560, 1672, 1674, 1694, and 1697 are included under the topic Early Vought History in all our PDF Extended History products and printed products wherever possible.

One can encounter great variation in the spelling of surnames: in early times, spelling in general, and thus the spelling of names was not yet standardized; and later, spellings would change with branching and movement of families. Variations of the name Vought include Vogt, Voget, Voit, Voigt,Voight,Voigh, Vogtlin and many more.

Prominent among members of the name Vought in this period include Baron Valentin Vogt von Salzburg, the Lord of Eichenhausen, Querbach, and Duerrnhof, who was first Privy Councillor to the Prince of Brandenburg, high administrator to the cities Uffenheim, Mainbernheim, Castell, and others, as...
Another 44 words (3 lines of text) are included under the topic Early Vought Notables in all our PDF Extended History products and printed products wherever possible.

Migration of the Vought family

German settlers were among the most common to come to North America between the mid-17th and mid-20th centuries. Poverty and religious persecution drove many Bavarians to make this long trek. tenant farmers were also enticed by the prospect of owning land. From east to west, these German immigrants populated the United States, settling in Pennsylvania, Texas, New York, Illinois, and California. Ontario and the prairie provinces of Canada also provided homes to many. Early settlers bearing the Vought surname or a spelling variation of the name include: Johann, Daniel, and Abraham Vogt, all of whom came to America in 1709 with their wives and families. They were the first of over one hundred bearers of this name to arrive in America throughout the next two centuries. Andreas, Caspar, and Catherina came in 1733.