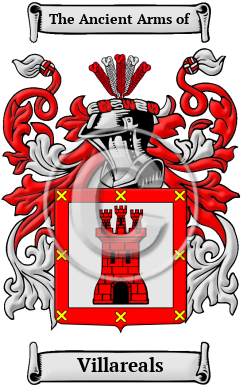 Noble surnames, such as Villareals, evoke images of the ancient homeland of the Spanish people. The original bearer of the name Villareals, which is a local surname, once lived, held land, or was born in the beautiful region of Spain. In Spain, hereditary surnames were adopted according to fairly general rules and during the late Middle Ages, names that were derived from localities became increasingly widespread. Local names originally denoted the proprietorship of the village or estate.

Early Origins of the Villareals family

The surname Villareals was first found in Castile, in north central Spain.

Early History of the Villareals family

This web page shows only a small excerpt of our Villareals research. Another 77 words (6 lines of text) covering the years 1231, 1512, 1628, 1934 and 1790 are included under the topic Early Villareals History in all our PDF Extended History products and printed products wherever possible.

Notable bearers of the family name Villareals were Bartolomé González de Villaverde (1512-189), a Spanish notary and conquistador. Born in León, Spain, he married María de Santa Cruz, from Paraguay, natural daughter of Spanish conqueror Juan de Santa Cruz. Together, they had 12 children, one of which was Mayor Bartolomé González de Villaverde. Another son, Roque González de Santa Cruz became a Jesuit priest and was the first missionary among the Guarani people in...
Another 73 words (5 lines of text) are included under the topic Early Villareals Notables in all our PDF Extended History products and printed products wherever possible.

Migration of the Villareals family