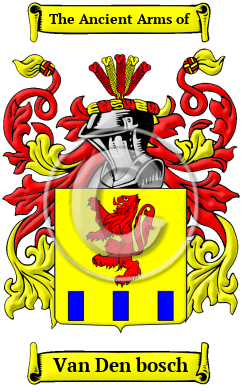 The surname Van Den bosch originates from the Old Norse word "buski," meaning "bush," or "woods” thus it is classed at a toponymic surname and was most likely used by a man who lived near a prominent bush. It is equivalent to the English surname "Bush."

The surname Van Den bosch was first found in Holland.

This web page shows only a small excerpt of our Van Den bosch research. More information is included under the topic Early Van Den bosch History in all our PDF Extended History products and printed products wherever possible.

From this era of Dutch history, those of this who distinguished themselves included Hieronymous Bosch (1450-1516), Dutch painter who's work is well-known for the use of fantastic imagery to illustrate moral...
Another 30 words (2 lines of text) are included under the topic Early Van Den bosch Notables in all our PDF Extended History products and printed products wherever possible.