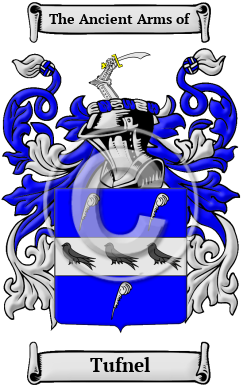 Tufnel is a name of ancient Norman origin. It arrived in England with the Norman Conquest of 1066. The Tufnel family lived in Essex, at Tufnell.

Early Origins of the Tufnel family

The surname Tufnel was first found in Essex where they held a family seat. Little is known of the early origins of this name but the proposition that it is derived from 'tough nail' cannot be accepted and is somewhat typical of the attitude of Victorian historians at a loss to dig deeper than their own fertile imaginations. Since we believe the name to have been originally Tuffnall, the suffixes 'all' and 'ell'indicate a Norman origin and it may point to an early Norman settler about the time of the Conquest in 1066 A.D.

"In the XVII. century this name was spelt Tufnaile, and I am therefore rather inclined to take it au pied de la lettre (or rather at the end of the finger) and to consider "tough nail" as its etymon." [1]

Early History of the Tufnel family

This web page shows only a small excerpt of our Tufnel research. Another 175 words (12 lines of text) covering the years 1580, 1640, 1820, 1823 and 1924 are included under the topic Early Tufnel History in all our PDF Extended History products and printed products wherever possible.

Endless spelling variations are a prevailing characteristic of Norman surnames. Old and Middle English lacked any definite spelling rules, and the introduction of Norman French added an unfamiliar ingredient to the English linguistic stew. French and Latin, the languages of the court, also influenced spellings. Finally, Medieval scribes generally spelled words according to how they sounded, so one person was often referred to by different spellings in different documents. The name has been spelled Tuffnel, Tuffnell, Tuffnall, Tuffnal, Toughnell, Toughnall, Toughnel, Toffnel, Toffnall, Tufnaile and many more.

More information is included under the topic Early Tufnel Notables in all our PDF Extended History products and printed products wherever possible.

Tufnel Settlers in Australia in the 19th Century