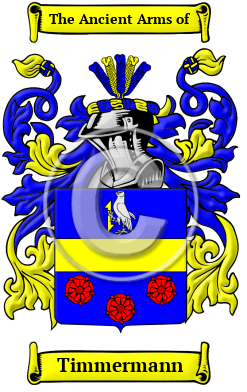 The ancestral home of the Timmermann family is in the historic German region of Prussia. The name Timmermann is an occupational hereditary surname, a type of surname that was taken from a word having to do with the profession of the original bearer. It is a name for a in Prussia. The name Zimmer means "room" or "chamber" while the derivative Zimmerman and its many variations are occupational names meaning carpenter, literally "room man."

Early Origins of the Timmermann family

The surname Timmermann was first found in Prussia, where the name was closely identified in early mediaeval times with the feudal society which would become prominent throughout European history. The name would later emerge as a noble family with great influence, having many distinguished branches in Germany and abroad, and become noted for its involvement in social, economic and political affairs. Chronicles first mention the knight Hans von Zimmern, who signed his name Hans Zimmerlin, of Wuerttemberg around 1414.

Early History of the Timmermann family

One can encounter great variation in the spelling of surnames: in early times, spelling in general, and thus the spelling of names was not yet standardized; and later, spellings would change with branching and movement of families. Variations of the name Timmermann include Zimmer, Zimmerle, Zimmerer, Zimmermann, Zimmerman, Zimerman, Timmer (northern Germany), Timmermann, Timmerman and many more.

Another 39 words (3 lines of text) are included under the topic Early Timmermann Notables in all our PDF Extended History products and printed products wherever possible.

Timmermann migration to the United States +

Since medieval times, the state of Prussia has played an important part in the history of Germany. The state's military powers were historically very strong, and endured until after the Second World War, when the territory was broken up and divided between the Soviet Union, Poland, East Germany and West Germany. A spurt of migration followed, with some Prussians going elsewhere in Europe and many others crossing the ocean to North America. Most entered the United States through Philadelphia. Some remained there, while more moved on to the states of Ohio, Texas, Illinois, California, New York, and Maryland. Others traveled to Canada and settled Ontario and the prairie provinces. Research into the origins of individual families in North America revealed records of the immigration of a number of people bearing the name Timmermann or a variant listed above:

Timmermann Settlers in United States in the 19th Century

Timmermann Settlers in Canada in the 19th Century