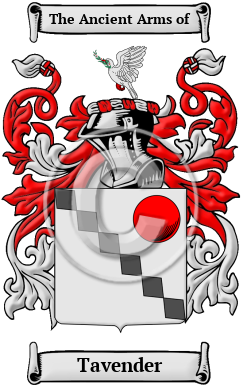 Early Origins of the Tavender family

The surname Tavender was first found in Yorkshire where William le Tauerner, Tauernier was listed in the Pipe Rolls of 1175 and 1177. Later, William le Tavenerner was found in Warwickshire in 1268. [3]

Early History of the Tavender family

It is only in the last few hundred years that the English language has been standardized. For that reason, Anglo-Norman surnames like Tavender are characterized by many spelling variations. Scribes and monks in the Middle Ages spelled names they sounded, so it is common to find several variations that refer to a single person. As the English language changed and incorporated elements of other European languages such as Norman French and Latin, even literate people regularly changed the spelling of their names. The variations of the name Tavender include Taverner, Tabenor, Tabiner, Tavernor, Taviner, Tavenor and many more.

Outstanding amongst the family at this time was William Taverner (fl. 1397-1407), of Leominster, an English politician, Member of Parliamnet for Leominster in 1397, 1402, 1406 and 1407; William Taverner (fl. 1417), an English politician, Member of the Parliament for Lyme Regis in 1417; and John Taverner (1490-1545), English composer and organist, generally regarded as the most important English composer of his era. Richard Taverner (1505-1575), was...
Another 67 words (5 lines of text) are included under the topic Early Tavender Notables in all our PDF Extended History products and printed products wherever possible.

Migration of the Tavender family to Ireland

Some of the Tavender family moved to Ireland, but this topic is not covered in this excerpt. More information about their life in Ireland is included in all our PDF Extended History products and printed products wherever possible.

Tavender Settlers in Australia in the 19th Century