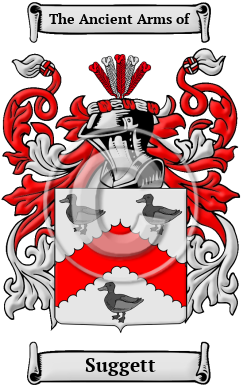 The name Suggett is an old Anglo-Saxon name. It comes from when a family lived in the tithing of Southcote in the county of Devon. The surname was originally derived from the Old English words sud which meant south and cot which meant cottage.

Early Origins of the Suggett family

The surname Suggett was first found in Devon where they were Lords of the Manor of Southcote anciently seated in that shire. "Southcote, an estate in the parish [of Winkleigh], appears to have given name to the Southcote family." [1]

Early History of the Suggett family

Before the last few hundred years, the English language had no fast system of spelling rules. For that reason, spelling variations are commonly found in early Anglo-Saxon surnames. Over the years, many variations of the name Suggett were recorded, including Southcote, Sothcotte, Southcott, Sothcott, Southcod, Southcodt, Soutcott and many more.

Notables of the family at this time include John Soputcote (1511-1585), an English judge, second son of William Southcote, by his wife, Alice Tregonnell, grandson of Nicholas Southcote of Chudleigh, Devonshire. "He was a member of the Middle Temple, where he was autumn reader in 1556...
Another 46 words (3 lines of text) are included under the topic Early Suggett Notables in all our PDF Extended History products and printed products wherever possible.

Suggett Settlers in Australia in the 19th Century