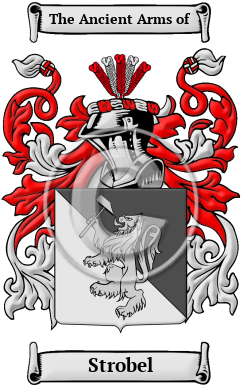 The ancestral home of the ancestors of the Strobel surname is the German province of Bavaria. The Strobel surname is derived from the Old High German "strub, " equivalent to the Latin "strobilus," meaning "unkempt." As such, it was probably originally a nickname for someone who appeared scruffy-haired. Nickname surnames came from eke-names, or added names, that described their initial bearer through reference to a physical characteristic or other attribute. There are also instances of this surname that are habitational; that is, they derive any of the several places named Ströbel.

Early Origins of the Strobel family

The surname Strobel was first found in Bavaria, where this family name became a prominent contributor to the development of the district from ancient times. Always prominent in social affairs, the name became a vital part of that turbulent region as it emerged to form alliances with other families within the Feudal System and the nation.

Early History of the Strobel family

This web page shows only a small excerpt of our Strobel research. Another 136 words (10 lines of text) covering the years 1714, 1743, 1784, and 1876 are included under the topic Early Strobel History in all our PDF Extended History products and printed products wherever possible.

One can encounter great variation in the spelling of surnames: in early times, spelling in general, and thus the spelling of names was not yet standardized; and later, spellings would change with branching and movement of families. Variations of the name Strobel include Strobl, Strobel, Strobell, Stroebel, Stroebele (Wuerttemberg), Strobil and many more.

Prominent among members of the name Strobel in this period include Michael Strobel von Haustatt und Schwanenfeld, an official for forestry and tolls in Tyrol, who was ennobled for his...
Another 30 words (2 lines of text) are included under the topic Early Strobel Notables in all our PDF Extended History products and printed products wherever possible.

In the United States, the name Strobel is the 6,336th most popular surname with an estimated 4,974 people with that name. [1]

Strobel migration to the United States +

Thousands of German settlers came to North America between the mid-17th and mid-20th centuries. The hardships of the long voyage were balanced by the opportunity to escape poverty and religious persecution. The descendents of these settlers still populate the states of Pennsylvania, Texas, New York, Illinois, and California. Many also live in Ontario and the prairie provinces of Canada. An inquiry into the early roots of North American families has revealed a number of immigrants bearing the name Strobel or a variant listed above:

Strobel Settlers in United States in the 18th Century

Strobel Settlers in United States in the 19th Century

Strobel Settlers in United States in the 20th Century

Strobel Settlers in Canada in the 19th Century

Historic Events for the Strobel family +