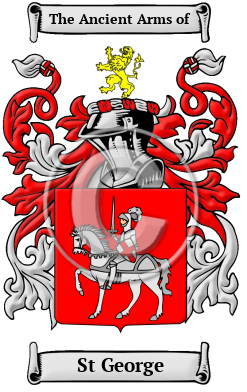 In the Middle Ages, French families took on surnames with increasing frequency. St George appeared at that time in the province of Limousin. It was derived from the ancient personal name George, which was borne by the popular Saint. It is ultimately Greek in origin and translates as tiller of the soil or farmer.

The surname St George was first found in Limousin, where the family has been traced to the early ages.

Most surnames have experienced slight spelling changes. A son may not chose to spell his name the same way that his father did. Many were errors, many deliberate. During the early development of the French language, a person usually gave his version, phonetically, to a scribe, a priest, or a recorder. Prefixes or suffixes varied. They were optional as they passed through the centuries, or were adopted by different branches to signify either a political or religious adherence. Hence, there a many spelling variations of the name St George, including Saint-Georges, Saint-George, de Saint-George, du Saint-George and many more.

Notable amongst the family was the Governors of the Provinces; two Knights of the Orders in 1688 and 1724; Ambassador to Denmark, Holland and Switzerland. Sir Henry Saint-George (1581-1644), was English Garter king-of-arms, eldest son of Sir Richard Saint-George, created Rouge Rose pursuivant-extraordinary in May 1610. Sir Richard...
Another 47 words (3 lines of text) are included under the topic Early St George Notables in all our PDF Extended History products and printed products wherever possible.

In the United States, the name St George is the 10,292nd most popular surname with an estimated 2,487 people with that name. [1]

St George Settlers in Australia in the 19th Century

St George Settlers in New Zealand in the 19th Century