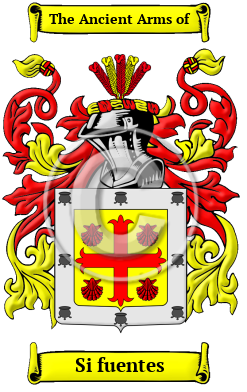 Noble surnames, such as Si fuentes, evoke images of the ancient homeland of the Spanish people. The original bearer of the name Si fuentes, which is a local surname, once lived, held land, or was born in the beautiful region of Spain. In Spain, hereditary surnames were adopted according to fairly general rules and during the late Middle Ages, names that were derived from localities became increasingly widespread. Local names originally denoted the proprietorship of the village or estate. Many Spanish local names reflect Arabic words or place-names because Spain was conquered by the Muslim Moors from the 8th to 12th centuries.The Si fuentes family originally lived in the region of Fuentes which is a place-name that means fountains.

The surname Si fuentes was first found in Castile, an important Christian kingdom of the Middle Ages.

This web page shows only a small excerpt of our Si fuentes research. Another 113 words (8 lines of text) covering the years 1185, 1576, 1680 and 1640 are included under the topic Early Si fuentes History in all our PDF Extended History products and printed products wherever possible.

Notable bearers of the family name Si fuentes were Juan Pedro Fontanella (1576-1680), a Catalan judge and advocate, co-instigator of the Catalan Revolt of 1640; seventeenth century Spanish navigator Bartolomé Fuentes; seventeenth century Catalan lawyer and politician Joan Pere...
Another 37 words (3 lines of text) are included under the topic Early Si fuentes Notables in all our PDF Extended History products and printed products wherever possible.

In the United States, the name Si fuentes is the 7,721st most popular surname with an estimated 2,487 people with that name. [1]

Si fuentes Settlers in United States in the 19th Century