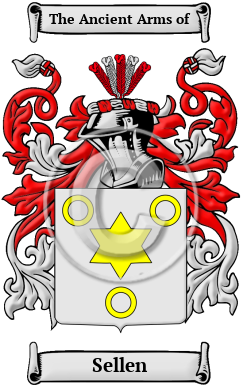 The surname Sellen is derived from the Middle High German word "sell," which meant "traveling companion." It was most likely originally nickname, which then became a hereditary surname.

Early Origins of the Sellen family

The surname Sellen was first found in Westphalia, where the name emerged in mediaeval times as one of the notable families of the region, later moving to Lithuania and East Prussia. From the 13th century the surname was identified with the military and civil service, which made this territory a landmark contributor to the development and eventual unification of the German nation.

Early History of the Sellen family

This web page shows only a small excerpt of our Sellen research. Another 155 words (11 lines of text) covering the years 1599, 1663, 1797 and 1806 are included under the topic Early Sellen History in all our PDF Extended History products and printed products wherever possible.

One can encounter great variation in the spelling of surnames: in early times, spelling in general, and thus the spelling of names was not yet standardized; and later, spellings would change with branching and movement of families. Variations of the name Sellen include Sell, Selle, Sellen, Sellers, Seller, Sellmann, Sellman and many more.

Notables of the period with the name Sellen were Thomas Selle (1599-1663), a German baroque composer; and Baron Adolph von Sell (b.1797), who was Lord Chamberlain at the court of Mecklenburg, as well as...
Another 33 words (2 lines of text) are included under the topic Early Sellen Notables in all our PDF Extended History products and printed products wherever possible.

Sellen migration to the United States +

Sellen Settlers in United States in the 17th Century