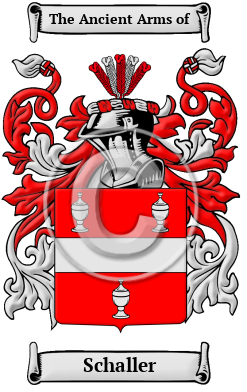 The Schaller family name comes from the Middle High German word "schal," which means "noise," or "bragging," and as such was thought to have originally been a nickname for a braggart, or for a market crier. The German people originally used only one name, but as the population grew there was often confusion between people of the same name. This required people to adopt hereditary surnames. Many people took surnames based on nicknames - sometimes known as eke-names - that described certain personal characteristics.

Early Origins of the Schaller family

The surname Schaller was first found in Bavaria, where the name was anciently associated with the tribal conflicts of the area. They declared allegiances to many nobles and princes of early history, lending their influence in struggles for power and status within the region. They branched into many houses, and their contributions were sought by many leaders in their search for power.

Early History of the Schaller family

This web page shows only a small excerpt of our Schaller research. Another 106 words (8 lines of text) covering the years 1498 and 1700 are included under the topic Early Schaller History in all our PDF Extended History products and printed products wherever possible.

One can encounter great variation in the spelling of surnames: in early times, spelling in general, and thus the spelling of names was not yet standardized; and later, spellings would change with branching and movement of families. Variations of the name Schaller include Schaller, Schalley, Schally and others.

More information is included under the topic Early Schaller Notables in all our PDF Extended History products and printed products wherever possible.

Schaller migration to the United States +

Hundreds of thousands of Europeans, including many Rhinelanders, made the voyage to North America between the 17th and 20th centuries. It was an escape from religious persecution and poverty and also an opportunity for people to start over and own their own land. Most landed at Ellis Island, off New York before moving on to the states of Pennsylvania, Ohio, Texas, Illinois, and California. Some also landed in Canada and settled in Ontario, while others headed west to the prairie provinces. A study of passenger and immigration lists has shown a number of people bearing the name of Schaller, or one of its variants, reaching North America shores very early:

Schaller Settlers in United States in the 18th Century

Schaller Settlers in United States in the 19th Century

Historic Events for the Schaller family +

Suggested Readings for the name Schaller +